What is the Ballman Project?

A unique collection of NFTs

When it’s time for the big reveal, collectors/players will discover the characteristics given to their randomly assigned NFT. 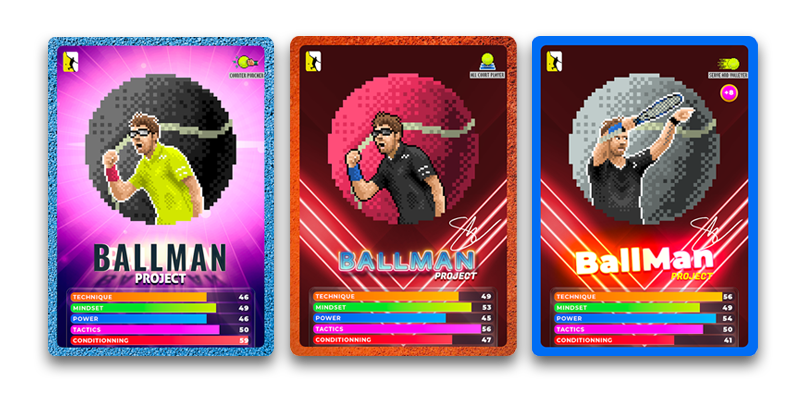 These player characteristics aren’t necessarily fixed: they may change over time depending on how they do in tournaments.

The NFT Open series is the main event offered by the Ballman Project, and the Ballmen give VIP access to it.

The NFT Open series aims to be the largest virtual tennis tournament circuit bringing together fans of NFTs and Tennis alike.

Several types of tournaments will be organized so you can help your player progress. The different tournament categories are below:

Your player can train every day to get better, stronger and have a better chance of winning tournaments.

The more you train, the more valuable your NFT will become.

One free tournament per week, open to anyone who owns a Ballman NFT, rewards the best players with NFT Open Series Points, goodies and boosters.

Finalists will automatically qualify for the NFT SUPER SERIES.

Each month, there is a major tournament with prize money open to anyone who owns a Ballman NFT.

Every three months, the top 2500 players can participate in the FINAL FOUR.

A ranking that takes into account the year’s results to date will be posted publicly online each week.

Those ranked in the top 100 at year’s end will win the right to participate in all Year 2 Super Series for free.

The top 10 will win the right to participate in all Year 2 Super Series and Final Fours for free.

Lots of surprises will be given out at the end of each month to reward the players of the month (highest ranked, Mover of the Month, etc.), including rackets signed by Stan, balls and goodies.

A play-to-earn game based on the world of tennis

Commitment, discipline, strategy, consistency... Just like the real world, the best virtual tennis players will dominate and convert their performance into steady income!

Will your Ballman take you to the top? It’s up to you to reveal them!

A Ballman is a combination of at least six visual characteristics (traits) of varying rarity and five tennis skills.

Some premium Ballmen have an intrinsic rarity commemorating a particular match and are issued in only four variations: classic, bronze, silver and gold.

A total of 28 premium Ballmen will be released.

A special one-off Ballman, the match ball, will be the 5555th ball to be minted and will be auctioned off – with the proceeds going to charity.

Different visual traits have different rarities, ranging from common to rare (less than 5% occurrence) to legendary (less than 1%).

You’ll be able to check the Ballman site to learn just how rare each trait is and to evaluate the total rarity coefficient of the Ballman according to the rarity score best practice based on the sum of the inverses of each trait’s rarity.

A Ballman is also a virtual tennis player described through tennis characteristics represented by scores based on their class, which is explained in the next section.

Last but not least, some Ballman players have bonus undocumented alterations, or ‘easter eggs’, that will make them very rare without this being visible to the rarity tools. It will be the community’s job to notice these variations and to assign them a value!

A Ballman player has tennis skills that are described through six parameters that will influence their game:

Ballmen are divided into five classes of players with different abilities:

Each Ballman class starts with a different distribution of abilities, but every class has a point total equal to 250 points plus 50 luck points. 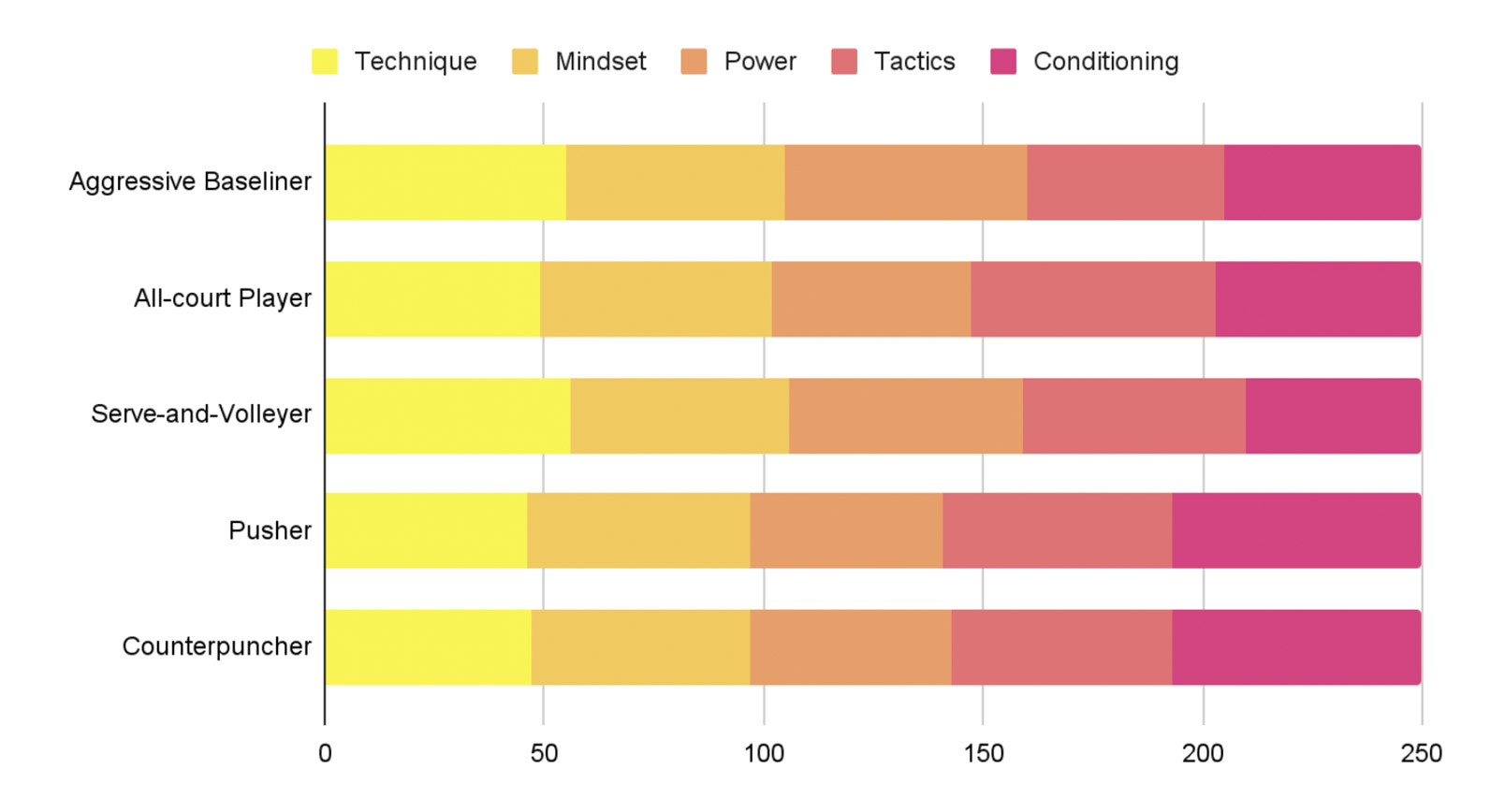 Some Ballmen will inherit rare skills that will give them an advantage over their peers in the form of bonus points on certain abilities.

Each player starts with an energy level that decreases over the course of the match – this may happen at different rates depending on their conditioning and power.

Skills can change during the game. For example, mindset affects the ability to apply technique and tactics when energy is low.

With every new rally, each player’s points are re-evaluated to determine who scores.

Bonus action: bonuses are added based on the player’s class and the current action. 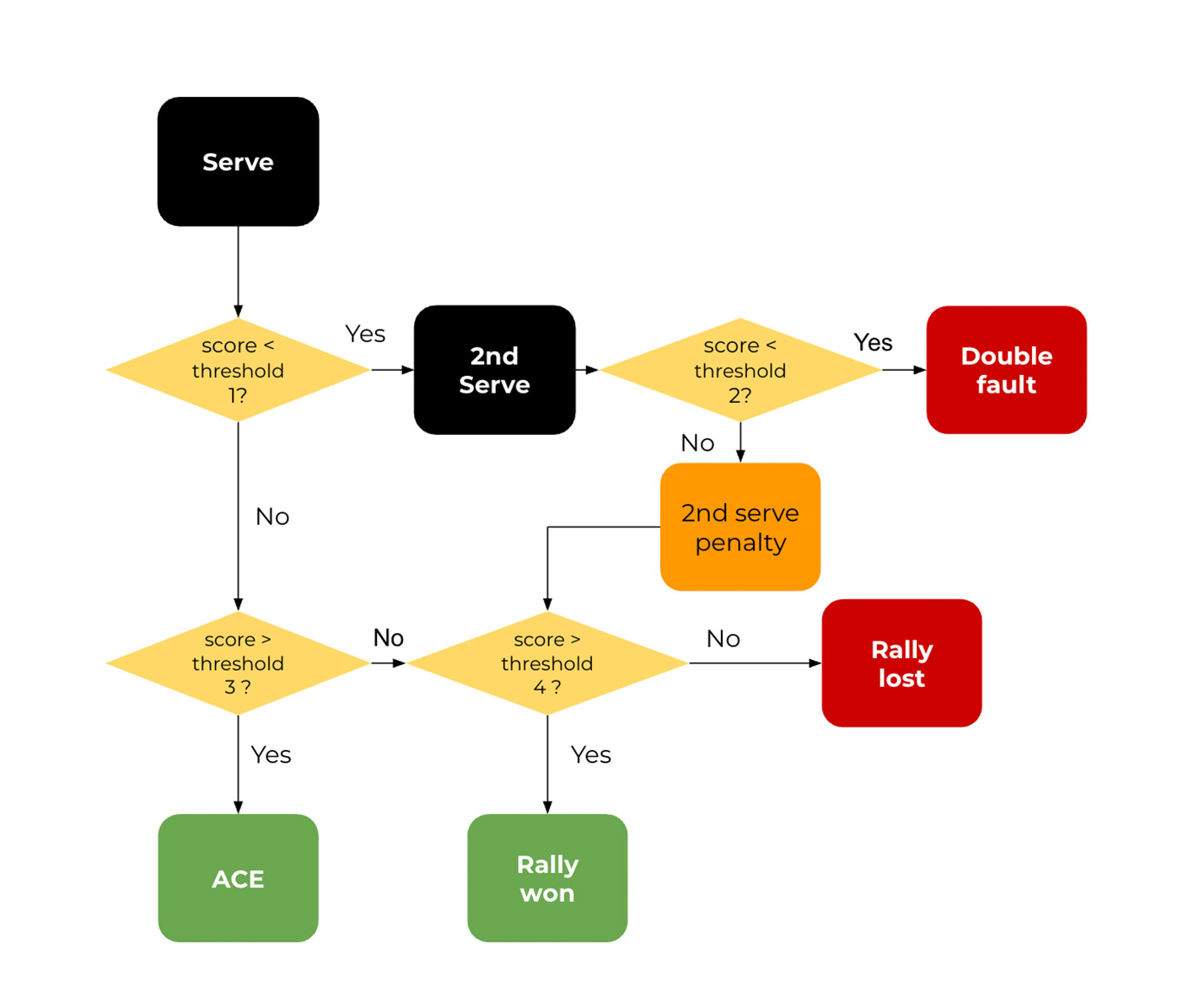 In a match, some classes of players inherit advantages against other classes (triangle inequality) as follows: 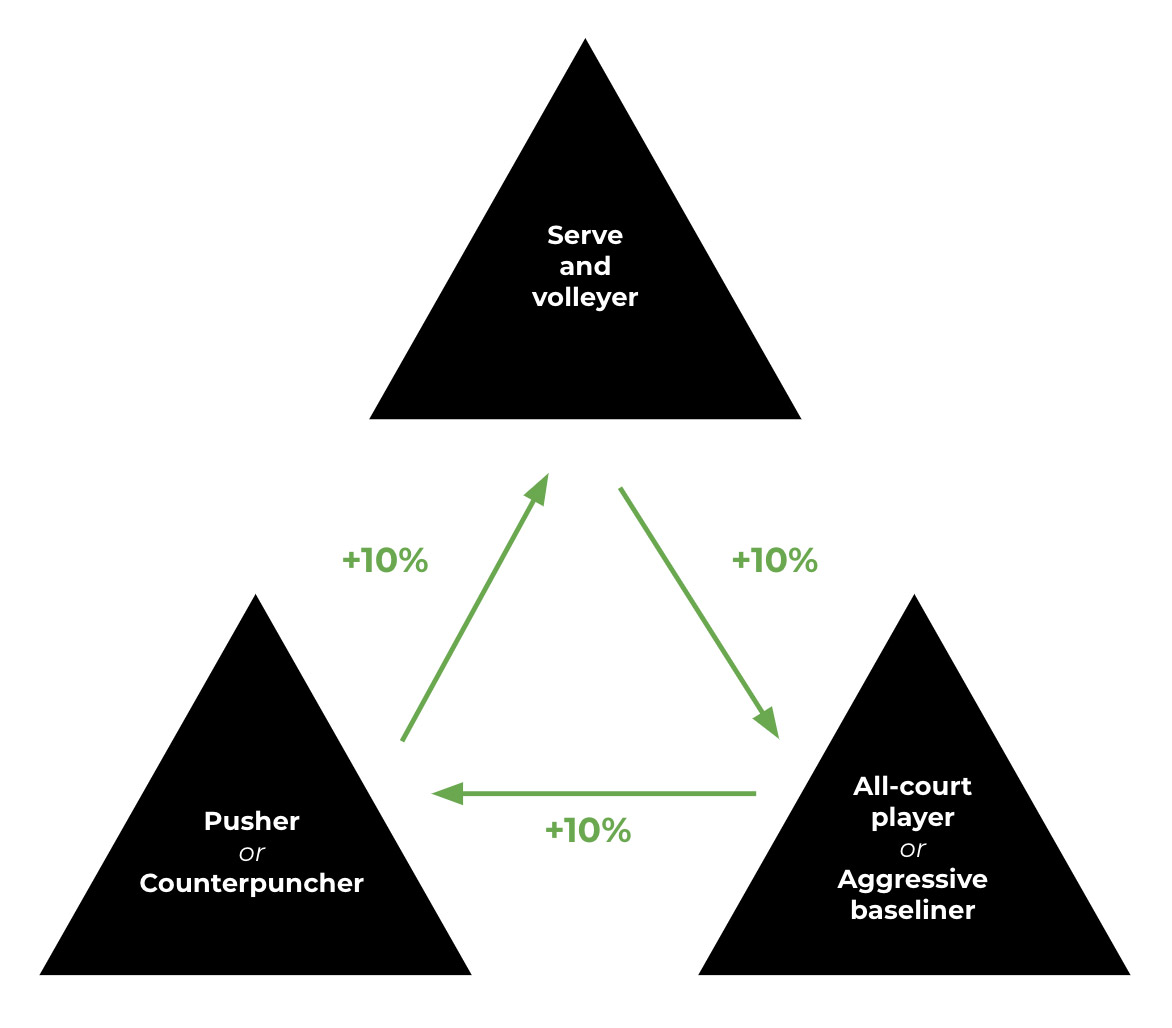 The skills inherited when Minted are scalable and can be improved in a variety of ways: 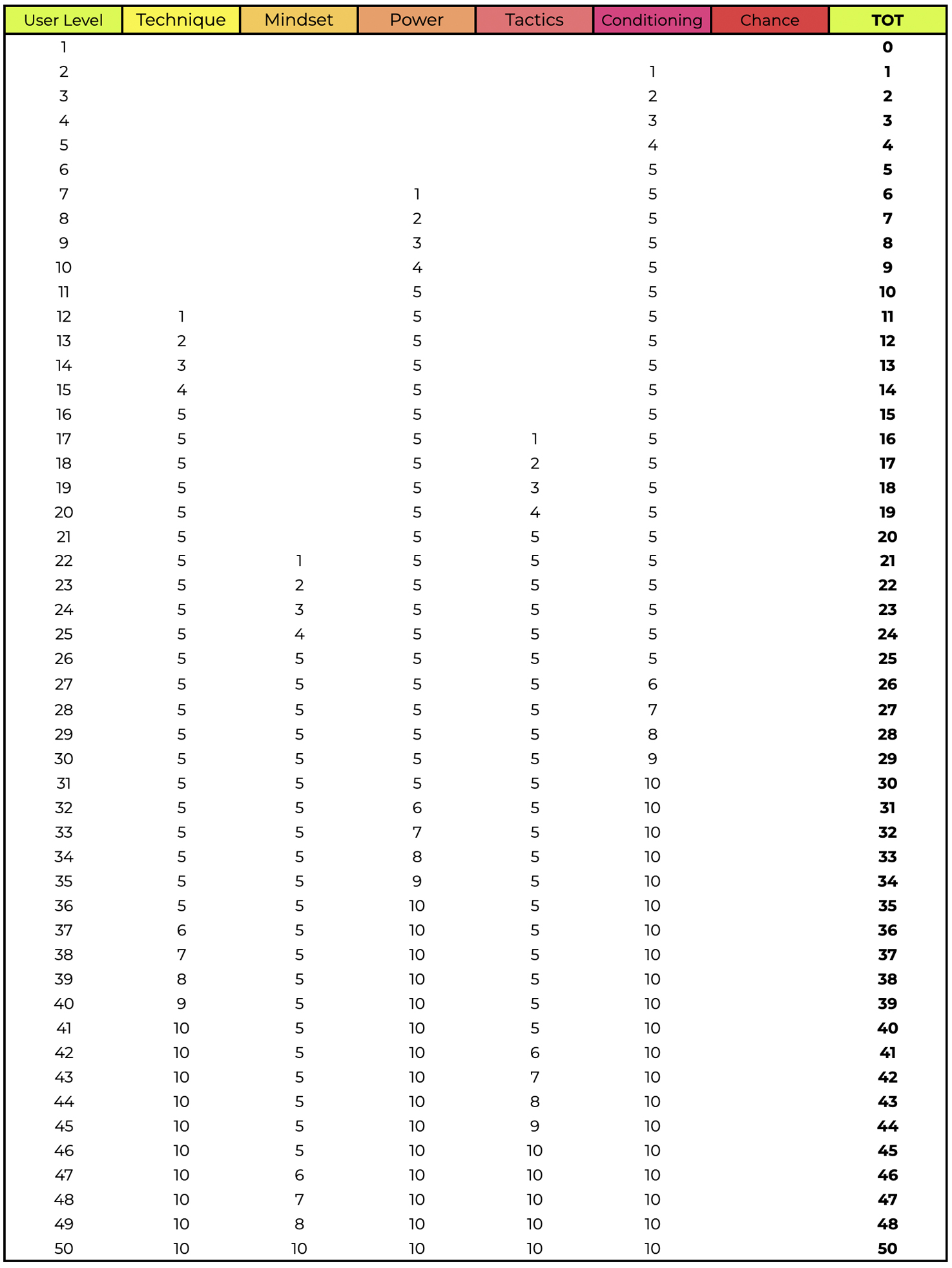 Just like in the real world, there’s no such thing as a sure victory! A stronger player on paper can still suffer a defeat.

Each rally is played using an algorithm that draws on the players’ abilities to determine where the ball lands. It works like this:

For each player and for each rally, the following calculations are made:

A total score for each player is obtained. This score determines who wins the rally and any notable event that will impact match statistics, like an Ace, a double fault, a break, etc.

So, with each rally, a score is obtained for each player and the winner of the rally is determined as follows: a threshold value is calculated for player1 and a random value is drawn by the simulator.

If this random value is lower than the player1 threshold, they win the point. If not, they lose it.

Here is how the threshold is calculated:

This means a player with the highest score is not guaranteed to get the point, they only have a better chance. During the course of the match, better skills always tilt the match in favor of the player with the superior abilities, but winning is never a foregone conclusion.

In fact, if you look at the graph of results obtained from several hundred thousand simulated matches, you can see that a theoretical score difference of +25% for one player gives them a 90% probability of victory (blue graph). However, if a player with a 15% lower overall score has a serving advantage, it lowers the odds to 50-50 (yellow graph). 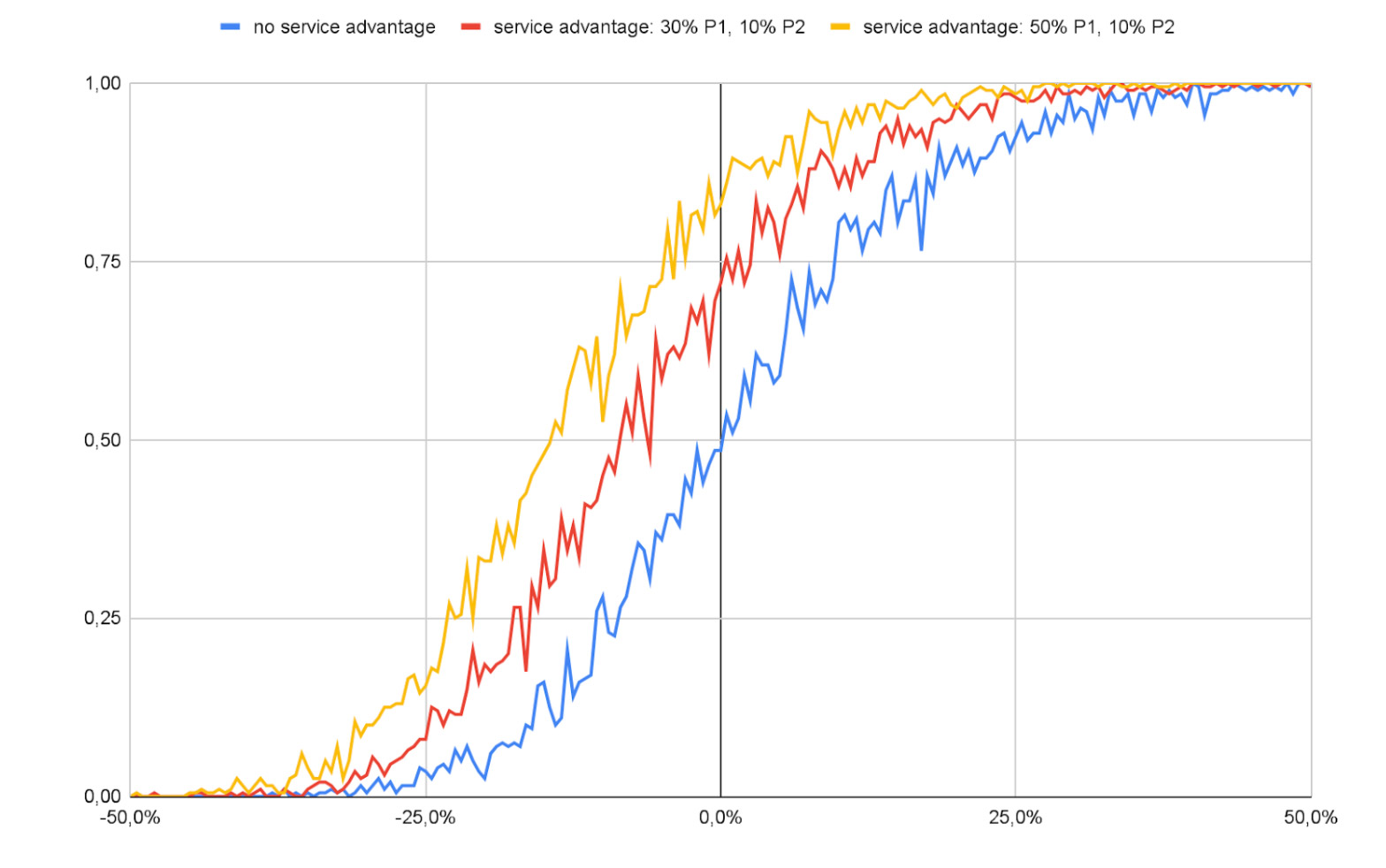 Rallies are simulated in real time and players can follow the progress of the match as it unfolds.

Detailed form showing the match which can be seen in real time as it plays out:

Compact form available for consultation when the match is over:

In the future, graphical representation systems showing the progress of a match will be offered to help you quickly understand how the match is going.

An overview of match statistics will be available and will initially show the following statistics: 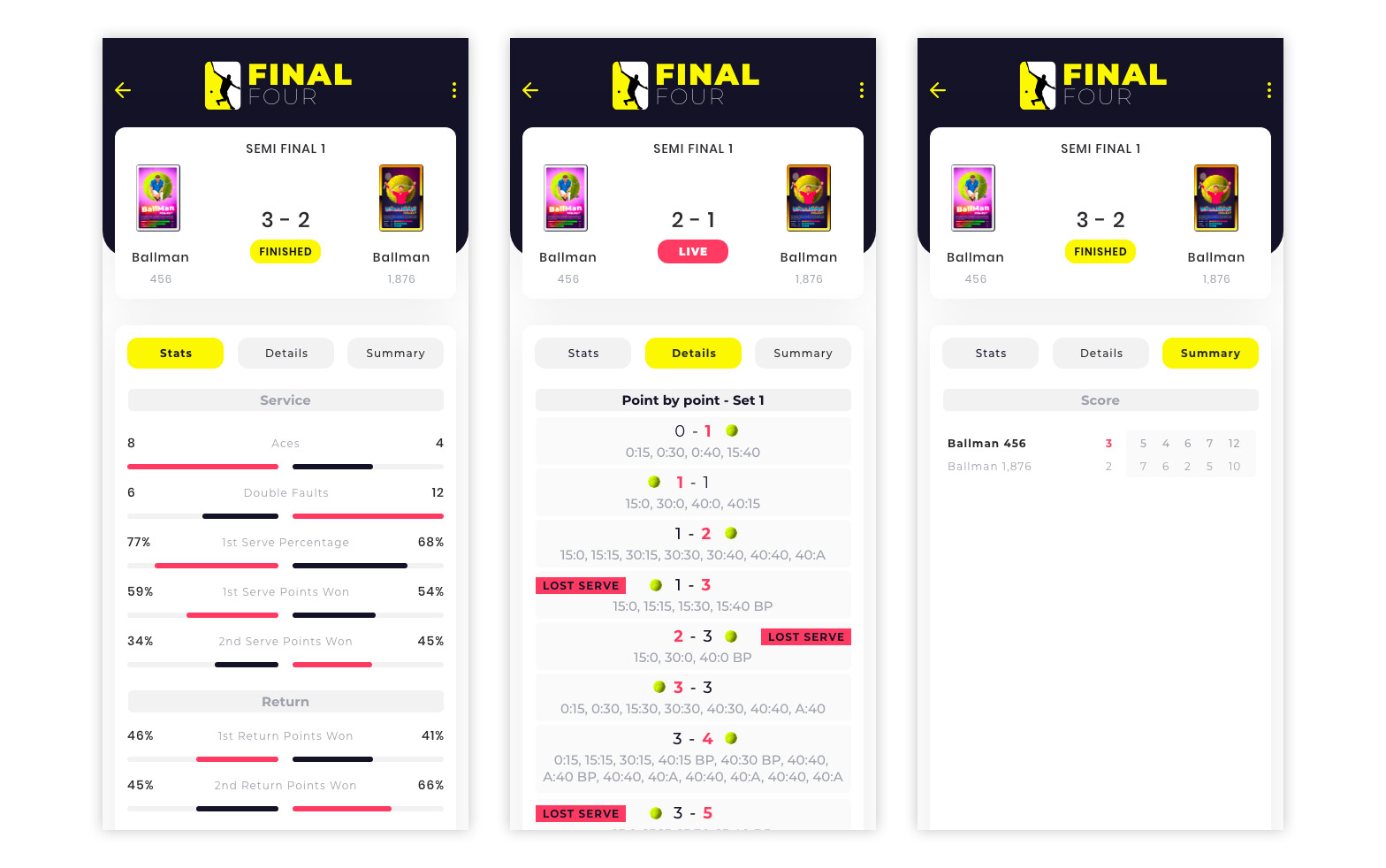 You must have an NFT license to participate in official tournaments. Which is great because your Ballman is a perpetual license!

Daily tournaments are a chance for you to earn experience points (see XP section) for your player, but you won’t earn NFT Open Series Points, Boosters or cash.

As mentioned in the Roadmap, cash allocations are linked to the number of Minted NFTs. Guaranteed total minimum tournament prize pool of 20 ETH if the roadmap is 75% achieved and 50 ETH if it is 100% achieved.

Each tournament has its own set of features for admissions and entrance fees, but the organization of matches will be distributed using a common principle so they can be fully automated:

Once players are registered, the number of brackets to be arranged is determined by randomly grouping sets of 64 players. All the winners from the first bracket will play each other in the final bracket in singles or doubles playoffs.

All brackets are ordered according to the NFT Ranking seed to ensure that the theoretical best compete in the end.

The NFT OPEN SERIES will run each month according to a simple schedule available soon at ballmanproject.io.

The Final Fours will take place every three months (exact date to be confirmed).

Being a Ballman is being part of the first virtual tennis community that created the NFT Open Series! It also means enjoying a permanent NFT Open Tennis license and its associated ranking, the NFT Open Series Points, and free participation in one tournament of each type in year one and a discount on the first three years!

The NFT Open Series will earn all its stripes with the inclusion of prestigious partner NFTs who will help fund tournament prize money.

Revenue from tournament entries will be used as follows: 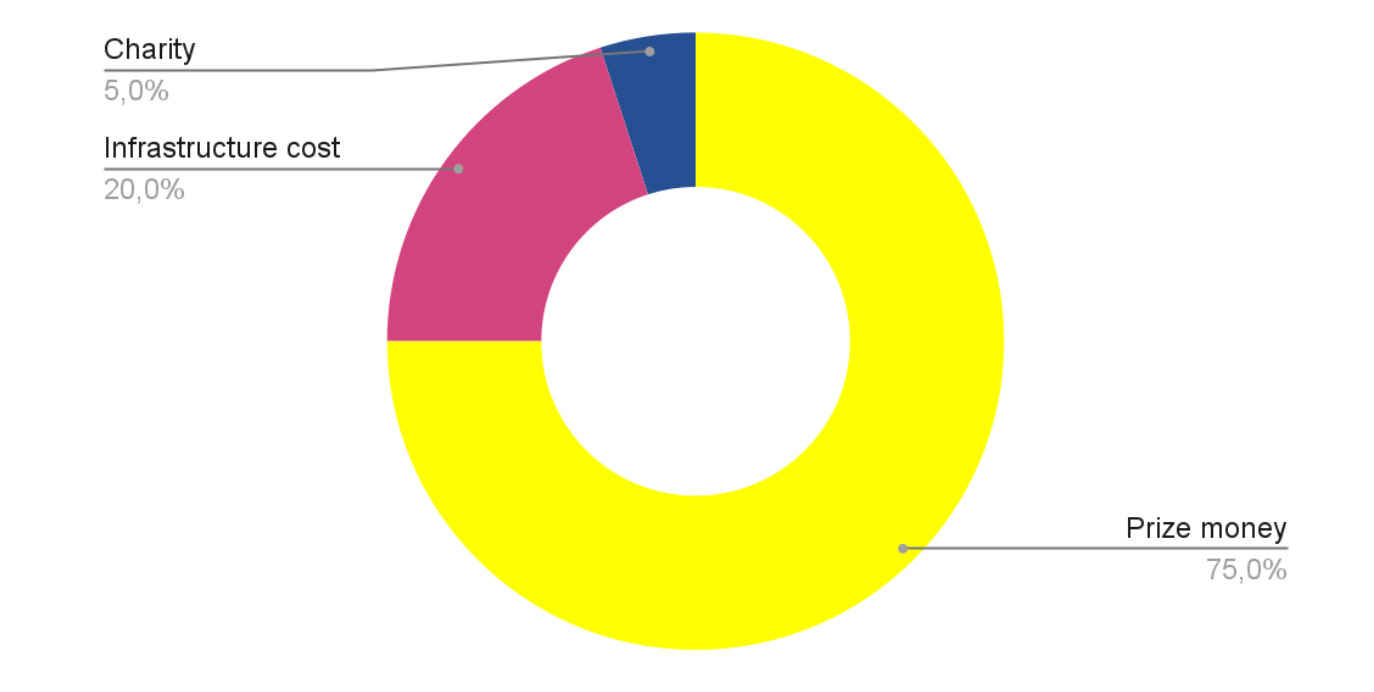 The Ballman smart contract, cornerstone of the Ballman project

The Ballman and its basic traits and properties are defined by an Ethereum ERC-721 smart contract. As such, its properties are immutable and it benefits from all the guarantees and features expected from a standard NFT, including the ability to be sold on a marketplace like Opensea.

The equipment, experience-based scalable skills and consumables are managed on a smart contract linked to the Ballman. This means a Ballman can own equipment external to the main NFT, which upgrades their skills. This equipment can also be sold on a marketplace. To minimize the costs associated with transactions (gas fees), this Smart Contract is managed on the Polygon blockchain (compatible with Opensea).

Finally, NFT Open Series rankings, main match results and trophies won are also recorded on a specific Smart Contract that authenticates the performance of a Ballman or any other NFT. To minimize the costs associated with transactions (gas fees), this Smart Contract is managed on the Polygon blockchain (compatible with Opensea).

At each new stage of the roadmap, Ballman owners will be able to reveal their player. Those who purchase their player between two stages will have to wait until the next achievement stage before their Ballman is revealed.

The Roadmap also has several levels of unveiling. The first reveal will give the player’s class and basic characteristics, but not the rare abilities, which will be announced at the second reveal, achieved at 50% of the roadmap.